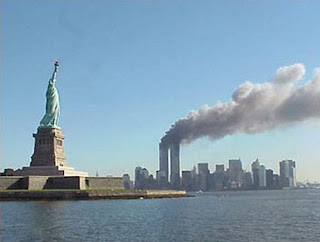 I don't have any particular connection to 9/11 other than what most people do. No relatives, no friends in the tower. All I do have are my memories of that period of time.

I remember going to work. I was working for a company that had me doing a project at a hospital about an hour away. I remember getting off at that exit and hearing on the news about a plane that hit one of the towers. Figured it was an accident. I got to the project and more and more news kept flooding in.

We watched throughout the day and of course I watched as soon as I got home. There wasn't a channel on that wasn't covering it. No air traffic was going for days. The price of gas went to over $5.00 a gallon. Later there were reports of anthrax at the capital. And every station, tv or radio was nothing but wall to wall coverage of the trade center.

I drank it all in for the first three days just trying to make sense of it all. On the evening of the third day, after listening and talking about it all relentlessly, the radio station I was listening to told the story of restaurant at the top of the tower. I remember driving down the highway listening to it. I don't remember the details other than one cook had left to get some vegetables or something and when he came back, things were already a mess. He couldn't go back up and no one from the restaurant could get down. Everyone perished.

Something got to me finally with that story. I don't know how accurate it was, I did find out later that everyone did indeed perish that was up there. After all the stories, all the images, what caused my reaction? Why this story? Whatever it was, I broke down at that moment. I wept uncontrollably. I couldn't stop for several minutes.

I know about respect for other cultures, I value diversity and all that. But this wasn't culture clash, this wasn't foreign policy comeuppence, this was murder. There is a good and an evil in this world and I realized this simple truth with utter clarity that day.

So every year, on this day, I sit and watch the 9/11 documentary I bought sometime in 2002. It shows the story of a firehouse that two french documentary filmmakers that were doing a film on rookie firefighters. It turned into something else. It reminds me what happened, and what I learned. It reminds me of compassion and resolve. It reminds me not just of what is evil in this world, but what is good. I think that's always a good reminder to have.
Posted by Rationalist Yoda at 7:52 AM