@Piersmorgan is an unserious person 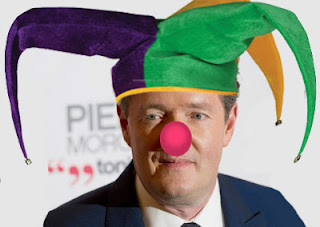 This man is truly disgusting. An unserious mind playing serious games with his influence.

We all know the man can't get his facts straight. Facts aren't even in the same neighborhood with this man. My issue is he, and so many others who think guns are the problem, are creating laws that actually result in more deaths.

Now if a private business doesn't want guns in their establishments, that's up to them. But I would say the gun-free zones knee jerk reactions are creating more and more target rich environments. The death toll is exacerbated because of the insane hatred of guns.

Will Piers ever have an answer to why he believes people aren't allowed to defend themselves? People should not be allowed to have guns, in his opinion. Why? Because the GUNS are bad. He assigns motive and alignment to a thing. The THING is evil.

Only deranged people would want an evil thing. Therefore you are evil and crazy for wanting one. He'll give lip service to hunters and whatnot but really, he looks at the AR-15 and sees evil.

It's completely insulting that his opinion of most of the gun-owning populace are nutbags just a traffic ticket away from going on a rampage thanks to the power the gun has on the human psyche. We are all just that weak and fragile. Only the police should have guns. They are wards of the state and he just loves the state. Police states have always turned out positive throughout history.

He gets people scared. Instead of informing himself, finding out how this gun works, putting it in his hands and pulling the trigger, he demonizes it. He spreads fear. Others use him to help spread this fear. It isn't about facts. The details don't matter. Guns are bad and less guns mean less deaths.

Of course, the opposite is true. People need to be able to defend themselves. If Virginia Tech wasn't a gun-free zone, there might have been people who could've have stopped the worst massacre in history. This has happened actually. But those stories don't make the news. Not just because it doesn't fit the agenda, but because the lack of death isn't a story. It just isn't and never will be. If gruesome gun deaths stop being a story, we are in big trouble. And in Chicago, they are already there. No one is making a big deal of the massacres that happen nearly every other day. How tragic is that? Who has tougher gun-control laws than Chicago? Not many places.

Of course it has to be responsible people who can get guns. Training and permits are fine with me. Training especially should be a must. But Pier's only solutions appear to be some sort of fantasy land where guns will disappear and bad people will say "Curses! Foiled again!" And no gun deaths will ever happen again. It's like a child imagining how to get rid of bad stuff. It's amazingly simple minded.

Knowledge is the only way to fight Piers. He's a lost cause, convincing him will never happen in the same way a religious zealot can't be convinced. But he needs to be fought. Called out constantly. Mocked constantly and by as many people as possible. I really do believe that the laws he and other gun control zealots have inflicted on us are causing more deaths than should be. I will no longer be nice and call him "misguided." Blood is on his hands and all those who helped get these laws enacted. People like him have succeeded in making so much of the populace afraid of the guns and ignorant of the guns. He needs to be stopped. No more of this.

Posted by Rationalist Yoda at 8:20 PM