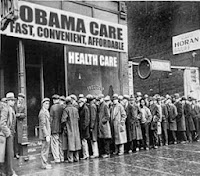 Expect more of these stories folks. The average home depot worker probably makes 30-40k a year. Who exactly helps the middle class? Of course we got an uphill battle to convince the fence sitters with zombies like this hitting me on twitter:

Ok, he asked for facts. So I gave them.


@Tristanshouts @WhiteHouse Well let's start with forcing me to buy something whether I want it or not. Then giving waivers to big companies
— Conservative Yoda (@Solo4357) September 24, 2013


@Tristanshouts @WhiteHouse Then there is delaying a law because we're not ready and stuff. And how about exempting federal employees?
— Conservative Yoda (@Solo4357) September 24, 2013


@Tristanshouts @WhiteHouse Then keeping what you have if you're happy with it. Until your employer realizes he can't afford it.
— Conservative Yoda (@Solo4357) September 24, 2013

So what's his rebuttal? Did he take my points and cite anything that refuted them? Nope. Just dismissed them cause you know, he said so and stuff. Obama rules!


@Solo4357 @WhiteHouse You are spouting GOP talking points based on nothing factual. #factsmatter
— Tristan (@Tristanshouts) September 26, 2013

Nothing factual. Everything I said is just a talking point. This is a prime example of a typical leftist argument. He doesn't like the right. So it really doesn't matter what I say, whether it's right or not. It's what the GOP says and they are puppy eaters. You can't listen to them. But I decided to play cause there wasn't any football on.


@Tristanshouts @WhiteHouse The federal employees getting exempted and told not to enroll is just a talking point. http://t.co/ClpSm3JVVC
— Conservative Yoda (@Solo4357) September 26, 2013


@Tristanshouts @WhiteHouse Everything you disagree with is just dismissed as a talking point. These are their arguments folks.
— Conservative Yoda (@Solo4357) September 26, 2013

Libs treat the political parties like baseball teams. My team is the Royals. Before you start laughing, know I don't care. They are my team. There is no logical reason other than geography but I love them. I will always root for them and I know it's nothing but pure emotion. So what? Baseball isn't life or death, it's pure entertainment, nothing more. Political parties are not baseball teams. You don't root for them, you find which one has the correct ideas for success, both for the country and for you as an individual. I will shred the GOP for every wrong idea they have. They deserve it. I will vote for a democrat if he is a conservative. Unlikely, I admit. Point is, don't get emotionally wrapped up in a candidate or a party. Be passionate about the issues. And be prepared to back it up.

I'm not going to convince this idiot, nor did I expect to. I did this prove a point about how to argue. I hope I convinced fence sitters who were reading the argument. I cited actual issues and then backed them up with sources, as best as I could within the limits of Twitter. My way takes more time but it is more effective.

We need to be effective.
Posted by Rationalist Yoda at 8:01 AM