Ok, before anyone calls me a hater, know I'm probably going to love this movie. I certainly want to. But I believe the clues are there: this is a remake of A New Hope. I base this solely on the trailer images and nothing more. No spoilers, no leaks, just speculation. Could be bullshit. Let's explore.

Both movies show a disaffected youth on a backwater desert world leading a fairly hardscrabble existence. Both have mysterious parentage. Both have rectangular landspeeders with useless windshields. (Rey's is just Luke's on its side.)

Both movies have a member of the empire escape. The droids and Finn both crash land on Jakku throwing Luke and Rey's life into chaos and sends them off on an adventure.

Both Luke and Rey encounter Han Solo and Chewie. Being chased by the empire, they both escape the desert planet and blast into hyperspace.

Leia and Poe, both ranking rebel leaders, get captured and tortured.

The Empire and the First Order both have a planet sized death machine. Both blow up a planet to show they mean business.

Both Rey and Luke mourn a death. Both end up on a green world. Both movies will feature an X-wing and Tie Fighter battle above the death machine which has a very long trench.

Now of course, the devil is in the details. What will the character arcs be?

I guess if you're going to repeat a movie, repeating the one that had the most significant impact on culture in the last 50 years is probably a good target to aim for.
Posted by Rationalist Yoda at 8:53 AM No comments:

Hey HuffPo: No one cares about a black Stormtrooper except bigoted Leftists 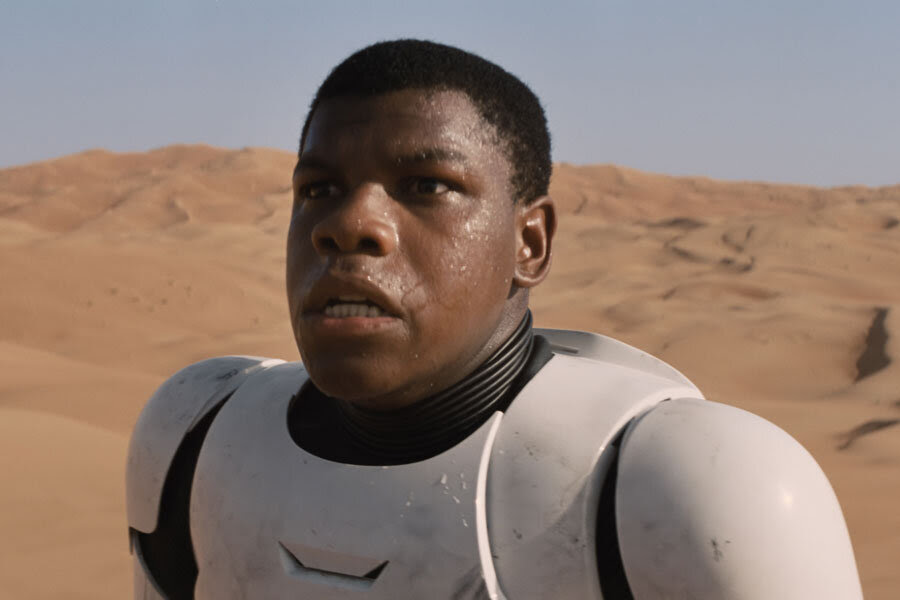 Ah the Huffington Post. Is there anything they won't make up?


John Boyega doesn't need a lightsaber to fight against narrow-mindedness and stereotyping: That's what acting is for.

The 23-year-old British actor, who previously starred in 2011's "Attack the Block," has a big (yet mysterious) role as Finn in "Star Wars Episode VII: The Force Awakens." Since his casting was announced, some fans -- influenced, no doubt, by the lack of racial diversity in the cast of the original trilogy -- have complained that a dark-skinned actor shouldn't be playing someone who wears a Stormtrooper outfit.

But in an interview with V magazine, Boyega said that these fans are just going to have to "get used to it."

Problem is, NO ONE has offered a whiff of evidence to support the existence of this wave of racism.

Google "Black Stormtrooper." You will find article after article condemning all the racists out there who are mad about dem darkies messin up our Star Wars. You won't find any of those actual racists these leftists are so mad about.

Because there really aren't any.

Which leads me to my point. Leftists are bigoted against whites.

These reporters never actually produce a stitch of evidence to support the idea that there is even close to a sizable minority that there are racist Star Wars fans out there. But they take this "information" to John Boyega, or Patton Oswalt, or whoever they can stick a microphone in front of and present it as fact. Then ask for a reaction. Boom the story is minted and set in stone as TRUTH.

It's not. It's made up bullshit to keep the narrative going that white people are forever racists. Don't buy it and don't believe it. It's all lies.

This is what they do. This is how you warp the perceptions of the masses who don't take the time to really pay attention. Don't buy it.
Posted by Rationalist Yoda at 8:05 AM No comments: