Someone Actually Competent Found their way to working on Obamacare WebSite, so of course she was ignored. 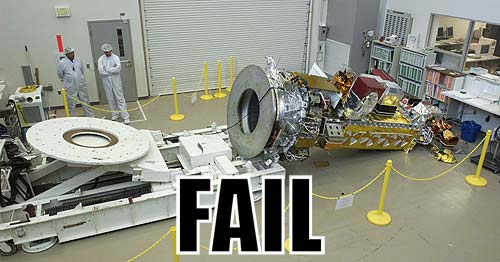 
Teresa Fryer, the chief information security officer for the Centers for Medicare and Medicaid Services (CMS), revealed the findings when she was interviewed Tuesday behind closed doors by House Oversight Committee officials. The security risks were not previously disclosed to members of Congress or the public. Obama administration officials have firmly insisted there’s no reason for any concern regarding the website’s security.

Let's compare the levels of incompetence that we have today vs. the moon shot. Would we have made it? Would the rockets have had "ACME" written on the side? Would Astronauts have been wearing water wings on splashdown?

Maybe the reason it would've been decided to have a "splashdown" is because after 5 or 6 times of planting the capsule into a mountain, they decided they really hated having to hose out the inside of the capsule now full of blood and brains and maybe make a change. This is after Jay Carney would tell us that everything is fine and the astronauts enjoy being smooshed.

The fire on the landing pad seems like incompetence on the surface, (it wasn't) but really it's no comparison compared to the hilariously stupid stuff that happens in Obamacare. Apollo I would've been the entire rocket fell over because the third astronaut entering threw it off balance. That's the kind of dumb shit stuff we got going here.

Now imagine, all of this idiocy is a web site to get your insurance. That's it. That's ALL it really has to do. Imagine when they have to do something hard like heart surgery. Cancer treatment. Does this not frighten the bejezzus out of you?
Posted by Rationalist Yoda at 10:00 AM