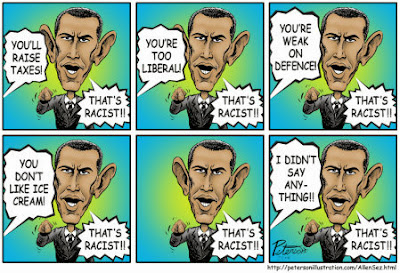 Incredible. I mean how have we not seen it? It's been there all along. White people hate Obama. I'm shocked after 5 years, no one has ever thought of this.

It would be funny if it weren't so tired and simple minded. The insane thing about this idiocy is how racist it comes off towards black people as well.


If you've been listening to President Obama’s speeches with any regularity over the last two years, you'll be familiar with this afternoon’s address at the Center for American Progress on income inequality and economic mobility. As usual, he notes the growing gap between the rich and everyone else, the deep insecurity of the middle-class, and the disappearance of working-class jobs that can provide a decent quality of life.

There was, however, something different about this speech relative to all his others. Namely, he zeroed in on one of the key problems liberals have always faced in their efforts to expand the social safety net.

Even today, nearly fifty years after the end of legal segregation, racial attitudes are the most reliable way to predict support for certain government programs. On one end is outright opposition: Whites who show high levels of “ethnocentrism,” for instance, are more likely to oppose means-tested welfare—like Temporary Aid for Needy Families (TANF)—even after you adjust for ideology. Likewise, whites who show high levels of “racial resentment”—the belief that blacks and other minorities unfairly benefit at the expense of white Americans—are reliable opponents of government programs for the poor.

Let's skip for a moment that the growing gap between the rich and the poor has continued to happen under his watch. After 5 years, he still has nothing to do with it, as if he's an innocent bystander just ever-so-concerned for what's happening to his fellow man.

First off, why is a social safety net a racial trait? If white people oppose the social safety net, does that mean a black person's natural inclination is to be for it? To make use of it? Are we saying that blacks and other minorities by virtue of having dark skin will naturally be unable to do for themselves and need government assistance? This idea offends me to no end. If whites oppose this, are they racist or do they believe that blacks are NOT inherently inferior and can be just as successful on their own?

This yahoo's entire argument is built on the idea that the two races are indeed different. Therefore different programs are needed for them. In effect, he is very racist against his own people.

Truth is, he simply wants to punish white people for all past crimes. In a country founded on the idea of individual rights, this is disgusting. Few white people today engage in racism. And even fewer are still alive that did the horrible things in the fifties. No white person alive today has ever owned a slave. But we all need to be punished for... wait for it... the color of our skin.


Indeed, there’s some evidence to suggest that the Affordable Care Act’s poor approval with white Americans owes itself—in part—to perceptions that the law primarily benefits blacks, Latinos and other non-whites.

No evidence is actually given in the article. Just take his word for it. Personally I think it doesn't benefit anyone, color of skin be damned and there is ample evidence to show it.

Oh wait, he did offer some "evidence."


Arguably, one ad in the 2012 election played on this perception, attacking Obamacare as a program that took billions from “you”—illustrated as an older white man—to spend on a new government program for unspecified others. What’s more, there is research to show that one ad—which attacked President Obama for “gutting welfare”—had the effect of priming negative racial attitudes towards African Americans.

That's right, one anti-obamacare ad, which had a white guy in it who didn't like having his tax dollars spent on "unspecified" others. But we can read between the lines, we KNOW what the "others" mean, right?


Thanks to decades of slanted images of black poverty, the broad image is that the black poor are lazy and unwilling to work, while the white poor deserve a break. Phrases like “welfare queen” and complaints about “handouts” and “Obamaphones,” for example, are heavily racialized and dredge up (or use) images of inner-city blacks.

I remember the Obamaphone lady. I bet you do too:

True enough, the video out there showed a black lady wanting an Obamaphone. It did cement itself into the public consciousness. But you know what? Conservatives didn't just put that out there. They followed up on her. She went and got information and they played Obama's own words to her. They didn't just use her as propaganda, as a prop. They tried to help her. Guess what happened?

That's right, she turned into a racist. Well, it happens. Some blacks just hate their own race. It's the ONLY explanation.
Posted by Rationalist Yoda at 8:08 AM