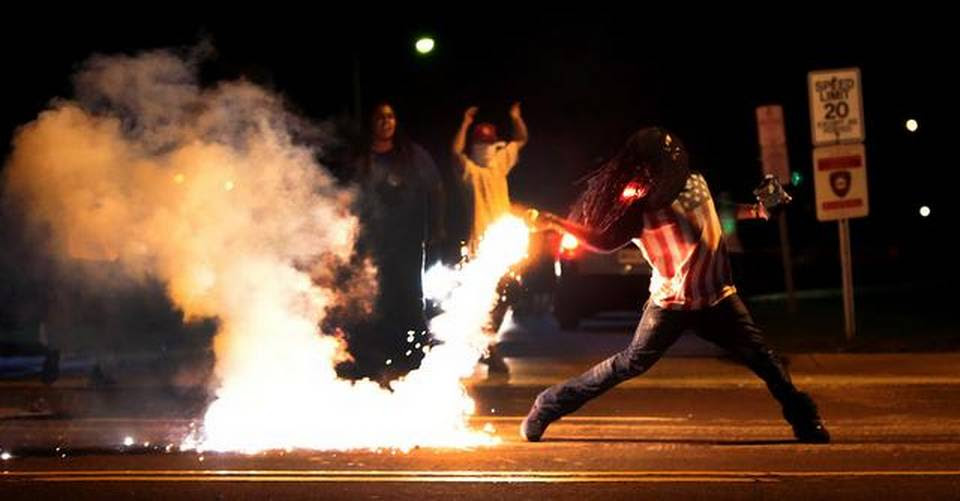 So Michael Brown was fleeing? Eh.. not so much.

“He pulled up ahead of them. And then he got a call-in that there was a strong-arm robbery. And, they gave a description. And, he’s looking at them and they got something in their hands and it looks like it could be what, you know those cigars or whatever. So he goes in reverse back to them. Tries to get out of his car. They slam his door shut violently. I think he said Michael did. And, then he opened the car again. He tried to get out. He stands up.

And then Michael just bum-rushes him and shoves him back into his car. Punches him in the face and them Darren grabs for his gun. Michael grabbed for the gun. At one point he got the gun entirely turned against his hip. And he shoves it away. And the gun goes off.

Well, then Michael takes off and gets to be about 35 feet away. And, Darren’s first protocol is to pursue. So, he stands up and yells, “Freeze!” Michael and his friend turn around. And Michael taunts him… And then all the sudden he just started bumrushing him. He just started coming at him full speed. And, so he just started shooting. And, he just kept coming. And, so he really thinks he was on something.”

Jay Nixon is getting the National Guard.


Missouri’s governor said on Monday he would send the National Guard into the St. Louis suburb of Ferguson to restore calm after authorities forcibly dispersed a crowd protesting last week’s fatal shooting of an unarmed black teen by police.

Gov. Jay Nixon signed an executive order deploying the U.S. state militia, saying demonstrators had thrown Molotov cocktails and shot at police as well as a civilian, a description of the night’s events diverging widely from some eyewitness accounts.

“Tonight, a day of hope, prayers, and peaceful protests was marred by the violent criminal acts of an organized and growing number of individuals, many from outside the community and state, whose actions are putting the residents and businesses of Ferguson at risk,” Nixon said in a statement on his website.

Well the media just knows this all bullshit. They got the facts.  And because those facts are irrefutable, social justice reigns, in the form of burning down Walgreens. The media, ever the calming influence, calls it a race war.


While the language about a “race war” is somewhat irresponsible and largely unfounded (and would be the considered the height of recklessness had they been written by a conservative), the notion that some of these protests were sparked by a sense of desperation at the start is valid and important. It is worth having a national discussion about the criminal justice system, which many on the right and left believe is in desperate need of reform. But it is not fair to suggest that the current momentum and the tempo of these protests are entirely due to social dissatisfaction.

On Sunday night, amid some of the worst rioting in Ferguson yet, Missouri Gov. Jay Nixon was forced to call in the National Guard. The officer in charge of the police response in Ferguson, Capt. Ron Johnson, determined that premeditated and coordinated attacks were being executed by protesters against police and on private businesses. Directionless expressions of social distress by a disenfranchised minority do not take the form of managed and focused assaults. That is the work of the criminals who have hijacked these protests for their own ends.

These columnists are correct to examine the origins of these protests and determine that they are founded in root causes far more universal than the shooting death of one teenager. They have, however, apparently evolved to a point now where they no longer resemble social unrest at all. In fact, they look much more like the majority of history’s reptilian mobs; common, recognizable, and fleeting, the majority of those violent outbursts did not herald some grand social transformation.

Maybe the media's pissed off and stoking the fires cause the police really don't have any more patience for their stupidity.


At one point, police appear to have become frustrated with the media on the scene. One officer, apparently bothered by the bright light from a camera covering the event live on the internet, screamed and allegedly threatened a man operating the camera – reported to be Mustafa Hussein of KARG – Argus Radio .

As the camera pans to the left and focuses on a section of a highway overpass, a loud voice (believed to be a police officer) is heard yelling directions, apparently angry at the use of a light. As one voice can be heard yelling something to the effect of, “Turn that sh** off!” another voice is heard saying something that sounded like an order to, “Get back!”

There is an unintelligible statement from another voice (possibly, “It’s off”), followed by the angry voice yelling, “Get the f**k out of here! You keep that light off or you’re getting shot with this!”

Posted by Rationalist Yoda at 9:07 AM