Student Punished for Saying "Bless You" After a Fellow Student Sneezed 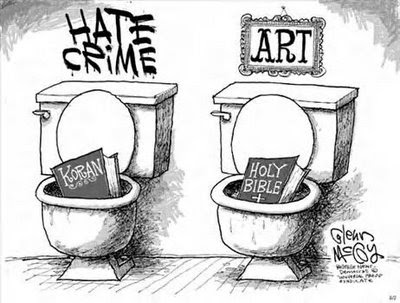 So it was not out of character for Kendra to say “bless you” after a fellow classmate sneezed. But that common courtesy landed the 18-year-old in hot water.

Kendra said she was rebuked by her teacher at Dyer County High School and thrown out of class for violating the teacher’s ban on the words “bless you.”

“She said that we’re not going to have godly speaking in her class and that’s when I said we have a constitutional right,” Turner told Memphis television station WMC.

Another student sent the television station a photo taken inside the teacher’s classroom showing a list of banned words. Among the censored words are "dump," "stupid," "my bad," "hang out" and "bless you."

My understanding of the purpose of education is the opening of young minds. Censorship always seemed at odds with that goal. I can kind of understand dumping silly colloquialisms and slang. The English language gets mangled enough in text messages, no need to destroy in everyday conversations. But putting "bless you" in the slang category is a stretch. For that matter, so is "stupid" and "dump." "Hang out" is such an old slang that's become part of the language.

This teacher obviously has anti-religious bent to her teaching style, however the critical thinking portion of her brain went bye-bye. Even atheists will say "bless you" to a sneeze out of habit and the meaning of the words at this point is simply a point of courtesy, nothing more. When this teacher infers meaning that's, for all intents and purposes, not really there anymore, she shows her ignorance at the reality of the times. Many people like to simply be polite. Criminalizing politeness is insane.

Evan Sayet said that everything liberals do is always to bring down the good and elevate the bad. This teacher really believes she is fighting some sort of evil by getting rid of "bless you" after a sneeze. This is what as known as a useless human being flailing out for relevance. Instead, the student will end up more relevant than anything this teacher has ever done.
Posted by Rationalist Yoda at 2:47 PM