And yet People Still Defend this Dirtbag: Obama didn't Actually Give Back 5% of Salary 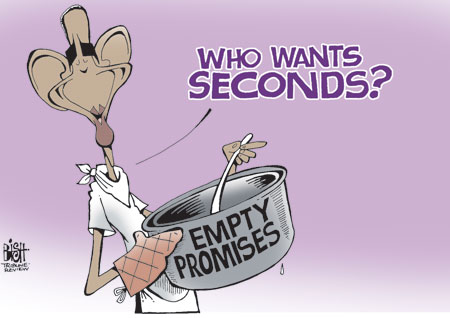 Yup. Don't you even think about feigning surprise.


Obama promised last April to take a 5 percent pay cut in “solidarity” with federal employees who were furloughed as a result of the automatic budget cuts, known as the sequester. The cut was meant to equate to the level of spending cuts imposed on nondefense federal agencies.

“The president has decided that to share in the sacrifice being made by public servants across the federal government that are affected by the sequester, he will contribute a portion of his salary back to the Treasury,” a White House official said at the time.

According to his tax returns, Obama is still receiving the presidential salary of $400,000 per year. Last year, he earned $394,796 in wages from the Defense Financing and Accounting Service (DFAS-CIVPAY), which handles the salaries for civilian members of the Defense Department.

Of course he didn't. A meaningless gesture that really, wouldn't cost him anything. He would make it all back after his term in speaking engagements and whatnot. But even this little bread crumb of a promise, even if it was a cynical ploy to garner sympathy (which it was), he couldn't even execute on that. But sure, let him overhaul the health care system. He's more than competent.

**Update**
Jay Carney "believes he did." Well. Then it must be true.

Posted by Rationalist Yoda at 12:02 PM