Section 179 and Why Congress can Eat a Dick 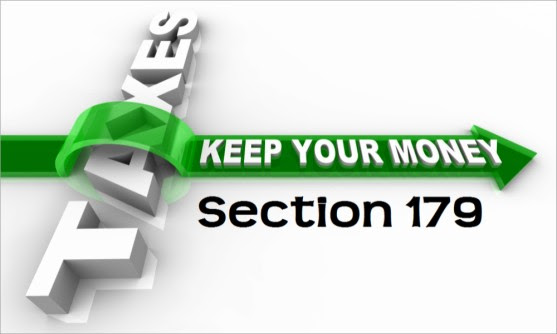 No I didn't say "Obama" because in truth, this is Bush's idiocy as well. And all of congress.

Raise your hand if you know what Section 179 is. Put your hands down, you lying dickbags. I know you don't know because hardly anyone knows what this is. Accountants don't even all know about this. Specifically, it's a tax law governing depreciation and deductibility of large purchases, but colloquially, it's a prime example of our all knowing government thinking they can pull and push levers and buttons and make the economy go.


Section 179 limits for the year 2013 were increased by the 'American Taxpayer Relief Act' which allows businesses to write-off up to $500,000 of qualified capital expenditures subject to a dollar-for-dollar phase-out once these expenditures exceed $2,000,000 in the 2013 tax year.

This should mean a substantial boost to your bottom line this year. But, to get the deduction for tax year 2013, you have to act this year, as once the clock strikes midnight on December 31, 2013; Section 179 can't increase your 2013 profits anymore.

This deduction has been dicked around with for over 10 years and especially in the last 7. Do a google search for "Section 179 Deduction" under news and you'll come up with a piddly 438 news stories on this. In contrast "Game of Thrones" has about 301,000,000 results. So informing the public on this hasn't exactly been job numero uno of congress or the dilweeds at MSNBC. As a result, the so-called stimulus hasn't stimulated jack squat.

But even more ridiculous is that every year congress keeps playing around with the numbers on this and seem to think that if they make it big, then everyone will run out an buy stuff and that will make the economy go. Which may or may not work for one year but this is incredible short-sighted.

Businesses invest in equipment because there is a return on that investment over the life of that equipment. Taxes do figure into their decision to but it is not a primary motivator. If it was, then McDonalds would buy bulldozers for the tax write offs.

What the big problem here is congress's incredibly inflated opinion of themselves and their role in the economy. These people believe that the businesses people create and run are there to please the government and therefore all the government has to do is pull a lever here or push a button there and blammo! Instant awesome economy. The fact that this thinking keeps failing over and over again does nothing to deter them. Obama is the face of this hubris but it's all the government. People get into government and with the power of regulation begin to believe that the role of government is to control businesses.

Why? A steady diet of pop-culture showing every businessman as a greedy, profit hungry asshole who would sell out his own grandmother if it meant pleasing the stockholders hasn't helped. Add in an MCI/Worldcom and an Enron for the leftist press to completely over cover and you got a recipe for a primo poisoned well.

Recently I was able to attend a symposium where Cindy Olsen was the keynote speaker. Cindy, as you may or may not recall, was a key player at Enron and was the first to testify. What she said was a bit eye opening. Enron was not a monolithic corporation full of Dick Joneses using people for ED-209 tests. They in fact were an incredibly innovative company that espoused ethics and integrity. Ken Lay was not a monster, but he was incredibly naive to what was happening in his company. He did not act in the best interests of the company and let others around destroy it. In that, he was very complicit.

Cindy's talk was all about ethics in business and how important it is. The real takeaway for me was that if a company wants to be profitable, it had better be ethical. In fact, companies that are ethical tend to be more profitable.

This is where the arrogance of the government comes into play. You get a bunch of leftists raised on a steady diet of "corporations are bad" and "Profit is Evil." They begin making all these stupid rules that businesses struggle to try to figure out, at a great cost to them. Cost they have to pay even though they've done nothing wrong. Then when the economy grows sluggish thanks to all the onerous rules, the government pulls a stimulus lever like that will make everything ok.

Stimulus like Section 179 are like salt and pepper to a meal. You have to make a good meal and all the salt and pepper in the world can't substitute for real food. Congress needs to stop with all this overly complicated crap and let businesses do what they do best.

And no, I'm not saying there should be no laws, I'm saying that stupid short sighted stimulus laws to deal with an overly complicated tax system that does nothing but get politicians re-elected need to go.

Posted by Rationalist Yoda at 9:10 PM