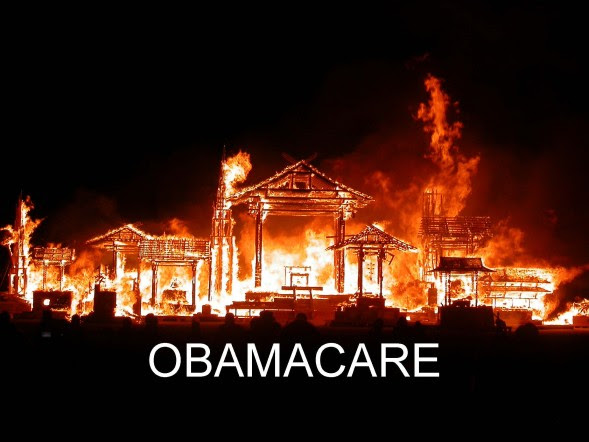 So Ace has an interesting article today.


Note the actual phrase begins with "let". It's a passive word. No one is saying "Start a fire and burn it down". It is burning already.

Out of control entitlement spending, zero political will to control discretionary spending and an unchecked debt is the fuel that is feeding this fire.

You want to know who is actively fanning the flames of this fire? Mainstream Republican candidates and office holders, not tea party fanatics or people who simply have lost interest in trying to stop the conflagration.

In fact, it's these "grown ups" who are so darn "electable" that are actively doing something....putting more fuel on the fire.

Until people realize that with the GOP as presently constituted stopping the increase in the rate of burning, let alone putting the fire out isn't on the menu and nothing will change.

So don't look at those of us who have washed our hands of this mess as the ones unwilling to stop the burning. We tried and were told to shut up. You guys who insist on voting for the GOP which will add more fuel to the fire are the ones who are grunting "fire good!", not us.

I would not just say we are part of the "let it burn" crowd anymore. The fire is now out of control. But "Letting it burn" is not an irresponsible view but actually an attempt to make people deal with what they have wrought. I fully support it. We tried to fight it, we tried to get rid of it in courts, we've tried to get people to listen. Not just Obamacare but all the Democrat/Liberal policies of "Government First." The spending, the corruption, the fraud, the waste... we fight these things because we know that they cannot continue. The best way is to stop them before they start.

It's now too late for that. The laws are in place. The spending is out of control. Until adults start saying "No", and change the laws, this will not be able to continue. It WILL burn, whether we let it or not. Perhaps we can get the Scott Walkers of the world elected in the Senate, House, and Presidency. People who understand that the governments job is not to take from those who succeed and spend it on garbage.

No I'm not saying they give it to the poor because honestly, the poor aren't really any better off. The amount of money getting shifted away from the working middle and upper class should be more than enough to let poor people live a lot better than they do. No, the money goes away. It feeds politicians and donors and companies and labor unions and the giant bureaucracy that doesn't seem to improve anything. In short, the money disappears and the debt grows.

This is now out of control. Best thing to do is retreat to states that have at least some sort of bulwark against the on-coming storm until the rest of the country grows up and wises up.
Posted by Rationalist Yoda at 1:16 PM