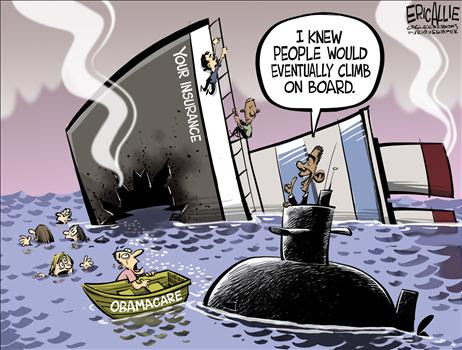 Ah ACA. You are the stories that keep bloggers like me pounding on the keyboards. For starters, the Hobby Lobby decision in the Supreme Court should come down today. Of course, if Hobby Lobby continues to be allowed to not pay for Sandra Flukes sex life, it's oppression. Somehow voluntarily working at company that doesn't provide everything you think it should amounts to oppression but government forcing a company to do something it has a moral objection to is not.

Now that Kathleen Sebelius is out, she has been hitting the lecture tour and admits maybe perhaps she made a couple of little boo-boos in implementing Obamacare. Yeah, no-shit.


“I sure made some mistakes along the way, in terms of focusing on some things and not on others,” Sebelius said. “I was terrified, as we looked at the roll-out of the health plan, that we wouldn’t have a market. That was my biggest focus and fear. And I spent a lot of time and energy with insurers, with consumers, with my old colleagues at the insurance commissioners’ offices, trying to make sure we actually had companies who came in to the market.”

At the same time, she said she spent “too little time, clearly, on the technology side, on making sure that what I was hearing was actually accurate and getting enough eyes and ears on that.”

Is O-Care a fundamental denial of free-speech? Does supporting it meaning going against the bill-of-rights? The federalist has an answer: (Hint: It's "Yes.")


In McCullen v. Coakley, all nine Supreme Court justices ruled that a Massachusetts law that creates a no-speech zone within 35 feet of an abortion clinic violates the First Amendment.

Though the opinion was unanimous, the justices divided sharply on their reasoning and the majority crafted a fairly narrow ruling. But, again, it was a ruling in favor of free speech rights of pro-lifers and that’s no small potatoes.

All of this crap was put in place ostensibly to get health care to people who need it. To make them more "healthy," as it were. Is it? Nope.


People enrolled in new plans under the health law are showing higher rates of serious health conditions than other insurance customers, according to an early analysis of medical claims, putting pressure on insurers around the country as they prepare to propose rates for next year.

Among those health-law marketplace enrollees who have seen a doctor or other health-care provider in the first quarter of this year, around 27% have significant health issues such as diabetes, psychiatric conditions, asthma, heart problems or cancer, the data show. That is sharply higher than the rate of 16% for last year's individual-consumer market over the same time frame, according to the data, which was supplied by Inovalon Inc., a health-technology firm that receives medical claims directly from nearly 200 insurers that are its clients.

So again kids, another lesson on how the private sector provides far better quality than the government. Stop looking to them to solve your problems, they only know how to create new ones.
Posted by Rationalist Yoda at 10:40 AM