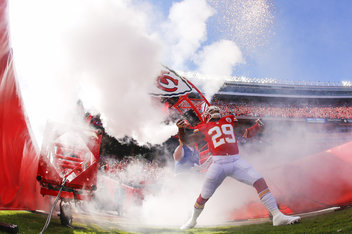 A quick divergence here. This season for us Chiefs fans is nothing short of miraculous. Let me take you back to last year and move us forward and you tell me if Hollywood could script it better. The ending is still up in the air and everything could fall flat but for now, am I enjoying the ride.

In 2012 the Chiefs were a dumpster fire. Matt Cassel's intended receivers appeared to be the other team's corners. Romeo Crennel infamously told reporters he had no idea what was going on out on the field. Scott Pioli, the former general manager, was more interested in pointing out candy wrappers on the stairs than actually fostering a atmosphere of creativity and trust. His first head coach, Todd Haley, looked like he fell out of a boxcar just prior to the games. They finished 2-14 with the first overall pick in the draft.

In December the unthinkable happened as Jovan Belcher shot his girlfriend 9 times and then went to the stadium and shot himself in front of Scott Pioli, Romeo Crennel, and linebackers coach Gary Gibbs. Whatever we may think of the job they did, they didn't deserve to have to see that.

Andy Reid had horrible tragedy of his own earlier that year as his son died of an overdose just before the season started. The Eagle's head coach of 14 seasons would go on to have the most dismal season of his career.

Reid spent the past 14 years coaching the Eagles. The 54-year-old was hired in 1999 and ends his career in Philadelphia with an overall record of 140-102-1. Under Reid, the Birds made the playoffs nine times, won six division titles, played in five NFC Championship Games and lost one Super Bowl.


After a record like that, you'd think he would not be dismissed so quickly, especially given the tragedy in his life. But football is a business, as they say. A 4-12 record isn't tolerated.

After the 2012 season, both the Chiefs and Andy Reid needed a fresh start. Clark Hunt cleaned house, brought in John Dorsey as the general manager and Reid as the new head coach.

It was clear from any fan's point of view that something was different at 1 Arrowhead Drive. The players weren't so guarded in interviews anymore. Andy Reid seemed comfortable and a guy. Injury reports weren't treated like national security documents. Off the record comments from employees said the Chiefs finally feel like a professional organization again.

And then they did the unthinkable. They went 6-0.

Now I don't know how long this ride is going to last. This may be the last stop. But I don't think so. Yesterday the fans broke the noise record at Arrowhead stadium. A reclamation, if you will. The defense played not just like the defenses of the nineties, but better. There is life and spark back into this town that has washed away the issues of the last several seasons.

If they go all the way, and that's a big if, what a story it is, both for Reid and the Chiefs. An organization as battered and damaged as any I've ever seen and a coach who was battered and dismissed badly. Both the organization and the coach went through dire tragedy. Both have found success and I don't think anyone or any team is more deserving.

Email ThisBlogThis!Share to TwitterShare to FacebookShare to Pinterest
Labels: Chiefs