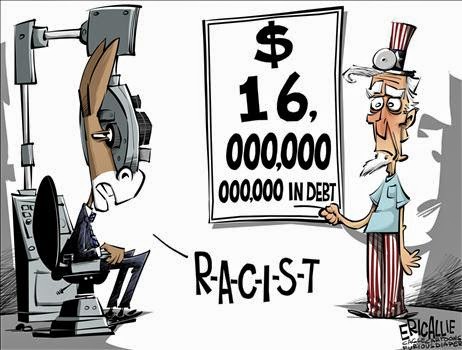 So the Daily Beast admits that maybe probably kind of sorta being against big government isn't really racist. I mean, of course republicans are racists (that goes without saying but we'll say it ad nauseum anyway) but this particular opinion of big government may not be totally completely one hundred percent racist per se.

First we make sure you know that that Republican's have always been associated with racism and always will be:


There’s no question that some of the past associations are ugly. To the extent that many Republicans, conservatives, and libertarians look back kindly on Barry Goldwater’s 1964 shellacking at the hands of Lyndon Johnson, they have to acknowledge that opportunistic segregationists came along for the ride (as did a young Hillary Clinton, who was hardly a racist). As Glenn Garvin writes: “Nothing was more problematic than the civil rights issue—particularly the 1964 Civil Rights Act, which outlawed most forms of racial discrimination. Goldwater was no racist; early in his career as a Phoenix city council member, he aggressively supported local civil rights ordinances…Goldwater was privately appalled to discover that his opposition to the Civil Rights Act rallied to his side not only libertarians but racists who detested and feared not state power but black people. He was horrified when Alabama’s racist Gov. George Wallace offered to switch parties and run as his vice president.”

So now that we got that out of the way, there may be some issues that aren't... entirely.... race based: (emphasis mine)


The fixations of small “l” libertarians include ending the drug war, mandatory minimum sentence and other prison reforms, and pushing a maximalist version of school choice, all of which would directly benefit minorities more than non-minorities. Libertarian public-interest law firms such as the Institute for Justice spend much of their time fighting occupational licensing laws that disproportionately stymie inner-city entrepreneurs who have little to no political or economic capital. IJ’s first case, dating back to 1991, attacked Washington, D.C.’s absurd laws against African hair-braiding without expensive and irrelevant cosmetology licenses.

Similarly, there’s no way to confuse libertarian obsessions with Fourth Amendment rights, ending stop-and-frisk policies, and reversing “the rise of warrior cops” with anything related to white supremacy. The same goes for the libertarian insistence against an interventionist foreign policy, whether through boots on the ground or via drone strikes and bombing runs. As with any group, there are differences, but libertarians have long been in the forefront of pushing for legalized abortion and gay marriage. (Reason magazine, like the Libertarian Party, was calling for the legalization of same-sex marriage in the early 1970s, when the Diagnostic and Statistical Manual of Mental Disorders still considered homosexuality a form of mental illness that should be “cured.”)

So apparently it not just non-racist to push for less government, but may actually be beneficial to minorities? Well yeah, because it's beneficial to all people regardless of color. This is crux of what conservatives and many libertarians believe: that people will benefit the most without an encroaching, overreaching government taking away their choices.

Of course the article talks mostly about libertarians. Conservatives are still filthy racists in their mind but this article is far more coherent than most of what you normally get out of the Daily Beast.
Posted by Rationalist Yoda at 12:30 PM