Obama: This Due Process and Rule of Law Thing? I'm Not Feeling it. 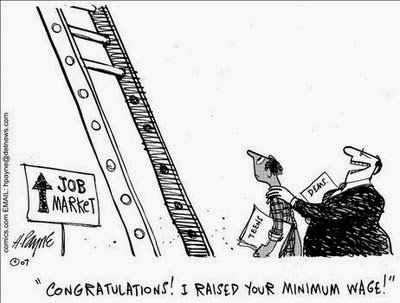 Welcome to the Obama regime. It is a regime now, not just a funny euphemism we use to over-exaggerate what we think of him.

President Obama, in the first of potentially many executive actions tied to his State of the Union address, will unilaterally increase the minimum wage for workers under new federal contracts to $10.10 an hour, from $7.25, in an effort to build momentum for a minimum wage hike for all Americans.

The executive order, which had been pushed by progressive Democratic lawmakers, applies to all contractors performing services for the federal government and would affect more than 2 million employees, according to an administration official.

Of course I went over the minimum wage hike and why it's such a bad idea. But try telling that to all the short term thinkers out there. The utter audacity of this banana republic asshole to simply decide is getting out of hand.


The president will then use Tuesday night's address to press Congress to pass a Democratic plan to increase the overall federal wage to $10.10 over three years, then indexing it to inflation, while also raising the minimum wage for tipped workers, the official said.

Boy oh boy talk about a self-fulfilling program. You keep hiking wages which in turn raises prices. That's inflation. So inflation goes up which causes wages to automatically increase. Which causes prices to go up to compensate. More inflation. This is a death spiral to our economy folks. This pissant has no clue what he is doing.  None.
Posted by Rationalist Yoda at 8:38 AM