Another Day, Another Ream of Obamacare Fail Stories... 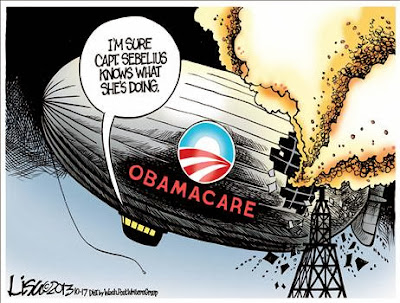 Well it wouldn't be a day that ends in "y" if there weren't more problems to be told. The Washington Post pretty much lays it all out on how the administration owns this, no matter how much they want to blame the GOP.

In May 2010, two months after the Affordable Care Act squeaked through Congress, President Obama’s top economic aides were getting worried. Larry Summers, director of the White House’s National Economic Council, and Peter Orszag, head of the Office of Management and Budget, had just received a pointed four-page memo from a trusted outside health adviser. It warned that no one in the administration was “up to the task” of overseeing the construction of an insurance exchange and other intricacies of translating the 2,000-page statute into reality.

Summers, Orszag and their staffs agreed. For weeks that spring, a tug of war played out inside the White House, according to five people familiar with the episode. On one side, members of the economic team and Obama health-care adviser Zeke Emanuel lobbied for the president to appoint an outside health reform “czar” with expertise in business, insurance and technology. On the other, the president’s top health aides — who had shepherded the legislation through its tortuous path on Capitol Hill and knew its every detail — argued that they could handle the job.

In the end, the economic team never had a chance: The president had already made up his mind, according to a White House official who spoke on the condition of anonymity in order to be candid. Obama wanted his health policy team — led by Nancy-Ann De­Parle, director of the White House Office of Health Reform — to be in charge of the law’s arduous implementation. Since the day the bill became law, the official said, the president believed that “if you were to design a person in the lab to implement health care, it would be Nancy-Ann.”

We have political hay to make and people to control. We can't be burdened with your reality things being impossible and stuff. Well over 3.5 million are losing their insurance. Democrats are starting to wake up to that reality.

Marlys Dietrick, a 60-year-old artist from San Antonio, said she had high hopes that the new law would help many of her friends who are chefs, actors or photographers get insured. But she said they have been turned off by high premiums and deductibles and would rather pay the fine.
“I am one of those Democrats who wanted it to be better than this,” she said.

Her insurer, Humana, informed her that her plan was being canceled and that the rate for herself and her 21-year-old son for a plan compliant with the new law would rise from $300 to $705. On the federal Web site, she found a comparable plan for $623 a month. Because her annual income is about $80,000, she doesn’t qualify for subsidies.


Well if you like your plan, you can keep it, for the new low, low price of triple what you were paying before. Act now! Or else!

Hell we can't even get through a weekend without the numbers tallying up faster than the national debt.

In Kentucky, 280,000 people will lose policies that do not meet Obamacare’s minimum-coverage requirements. According to the Kentucky Department of Insurance, there will be 130,000 people losing individual policies and 150,000 more will lose their group policies.

In Alaska, the state’s largest insurer, Premera, has sent cancellation notices to 5,360 people, over half its individual policy holders.

In Alabama, roughly 90,000 people will need to find new policies, a figure which the Associated Press compiled by contacting the state’s major insurers—the state Department of Insurance said it didn’t have figures on the issue. Of that number, 87,000 were policy holders with Blue Cross and Blue Shield of Alabama.


Even Jay Carney is getting beat down by all this. But Hollywood idiots are still willing to help out.

The California Endowment has awarded a $500,000 grant to the Norman Lear Center, a public-policy organization at the University of Southern California that focuses on entertainment, to make sure that television producers and their staffs fully understand the new health-care-reform law, and can work in pro-Obamacare storylines. The Endowment, a private foundation that has spent millions promoting the president’s law, is hoping its efforts will nudge primetime audiences to enroll in the new health-care law, which they consider misunderstood. “We don’t believe the government alone can break through with those facts,” a California Endowment vice president said.


Well when the government actually starts facing facts, maybe they could break through with them. Course that would result in Obamacare repeal and we can't ever admit we were wrong. We'll hurt as many poor as we must to save them from themselves.

Posted by Rationalist Yoda at 3:30 PM