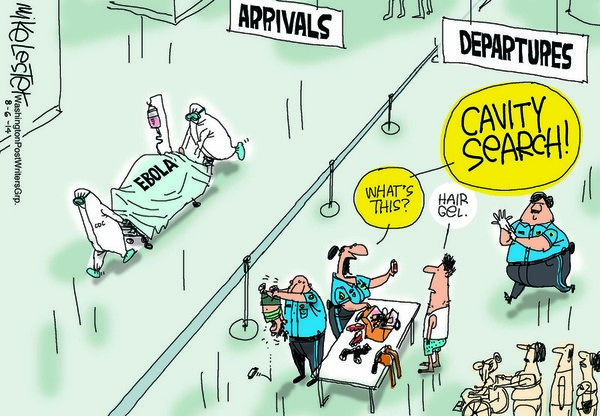 A new discovery of prehistoric art suggests that Europe wasn’t the only birthplace for early human creativity 40,000 years ago.

New research suggests that cave art found in Indonesia dates back just as far as the drawings that have been found in Europe. The find hints at an even earlier dawn of creativity in modern humans, going back to Africa, than scientists had thought.

Science does have a way of bringing the truth to light, no matter how much you want to politicize it.


This recently published Max Planck Institute paper claims that seasonal temperature variability across the world has been affected by “climate change” what they DON’T do as far as I can tell, is determine whether this is simply natural variation, or drive by some other forcing, such as CO2 or solar forcings.

Well we wouldn't want to find a cause that will undermine our already congressional bought conclusions. They paid good money for these scare tactics.

Given this, the ebola virus looks to be another ridiculously politicized disease. I'm sure calling people racist should cure it though.


Real shame of Dallas: Ebola fatality Thomas Duncan turned away from Presbyterian Hospital-Was it because he was too poor, black & uninsured?
— Geraldo Rivera (@GeraldoRivera) October 9, 2014

Yeesh. It's no wonder democrats are losing ground with goofballs like these. Let's hope the GOP momentum will be capitalized on with an actual plan.


In a fresh CBS News poll, Republicans hold a six point lead on the generic Congressional ballot — matching their final 2010 margin in this series...

Nice. Obama decides it's time to clean house. In just under 6 years, way to go.


Too little, too late? With Barack Obama’s polls cratering and former Cabinet officials firing broadsides at him, the President may fall back on a tried and true strategy of changing personnel to gain some breathing space on issues. David Ignatius hears from the oft-quoted “senior administration official” who tells him that Obama’s looking for “a talent infusion.” Better late than never

Maybe. But I'm sure he'll just bring in more lapdogs to tell him he's doing awesome.
Posted by Rationalist Yoda at 9:40 AM